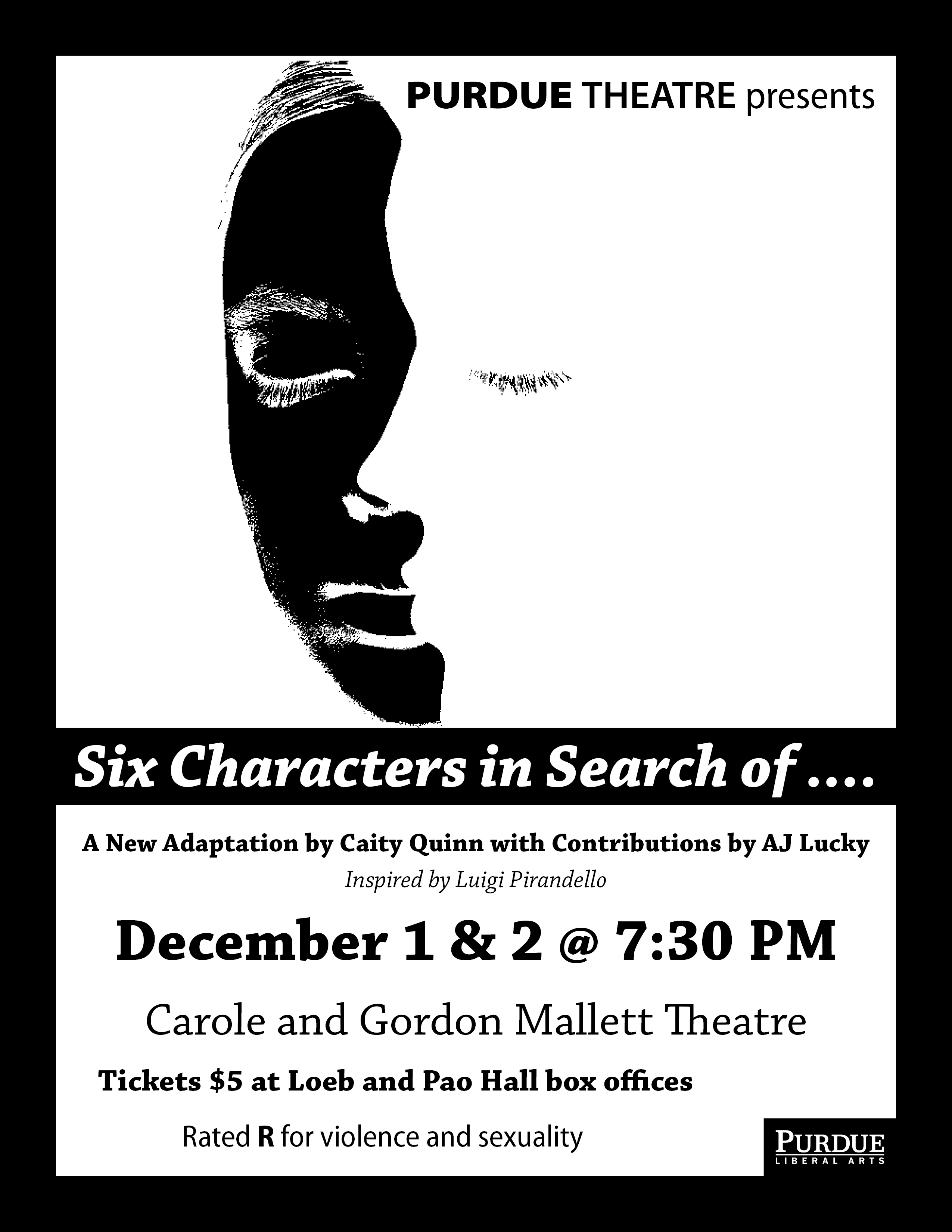 Six Characters in Search of...

A New Adaptation by Caity Quinn

Workshopped with students in the Purdue University Theater Department in November, 2017

Performed in the Mallet Theater at Purdue University Dec 1-2, 2017

Luigi Pirandello’s play, Six Characters in Search of An Author, received a dubious reception at its Roman premiere in 1921. Over time, this play has come to be hailed as a masterpiece that at various times has been described as ‘cerebral,’ ‘psychological,’ ‘baffling,’ and a ‘portrayal of man’s isolation from himself and the times.’ In our original adaption, AJ Lucky and I have attempted to maintain the spirit of inquiry and audacity that characterizes so much of Pirandello’s original.

As in the 1921 version, our actors clash with Characters from an unnamed play, confronting issues such as the struggle to distinguish illusion from reality, the mutability of personal identity, and the absurdist reality of being controlled by outside forces.

In seeking to adapt Pirandello’s material, we tried to honor the philosophical questions resonating at the heart of his work, while simultaneously addressing what has been noted as one of the play’s weaknesses, namely, that there is a great deal of talking about the action instead of seeing the story unfold. In our production, the descriptions of the Characters’ ‘drama’ have given way to seeing scenes play out in their entirety, to which the actors then comment upon and react, sometimes struggling to understand characters whose lives seem so very far removed from their own.

In light of recent events such as the murders of black men and children such as Alton Sterling, Tamir Rice, Michael Brown, and Philando Castile, as well as the allegations of sexual assault involving Harvey Weinstein and so many other powerful men in politics and entertainment, AJ Lucky and I felt united in our response. We desired to address and comment upon what we found to be the most critical spiritual diseases of our time; racial prejudice, sexual violence and the intersection of these issues as they play out in the lives of men and women.

Together, AJ and I worked to tell a new story of family betrayal and drama that reflects our current need as a society to challenge and dismantle systems of oppression and exploitation. We dream of a future where children are not bought and sold, where men and women are not abused for greed and profit through war and the global sex trade. We dream of a world where every human being has the opportunity to reach and manifest their highest potential, regardless of race, religion, nationality, or gender. Furthermore, as a director, I have tried to confront these issues through my casting choices and throughout our rehearsal process.

We know that some may find our viewpoints abrasive, our methods unseemly, our positions brazen, and our product distasteful. Our version is definitely more Game of Thrones than Gilmore Girls, after all. And yet, we believe and accept that critical feedback is an important component of the world of theatre. Indeed, in the words of A.O. Scott, “criticism is a habit of mind, a discipline, a commitment to the independent, open-ended exploration of works of art in relation to one another and the world around them.”

Our hope, is that, in the clash of differing opinions, the shining spark of truth may be ignited, illumine us all, and guide us on the path to a brighter world.