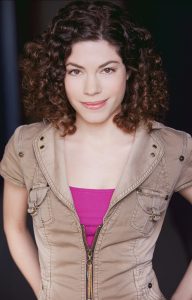 Caity Quinn is a director, actress, playwright, and teaching artist. She holds an MFA in Acting from York University. As an actor, Caity has appeared in the Off-Broadway production of The Prime of Miss Jean Brodie, as a principal dancer in the Disney film Enchanted, and in The Owl Girl at the Portland Stage Company, among other projects.

Recent projects include appearing at Theatre Passe Muraille in the bilingual French-English production of The Sound of Cracking Bones with Pleiades Theatre in Toronto, and directing the premiere of her play American Refugee in Vancouver, produced by Theatre Hera West.  In 2017, she directed two plays at Purdue University: Rabbit Hole, and a new adaptation of Six Characters in Search of an Author that she  wrote in collaboration with AJ Lucky, a Purdue student in the African-American studies department.

She has written and directed numerous plays including Ties of Blood: The Brontës (Paprika Festival/Theatre Passe Muraille), Little Women (Original Kids Theater Company), O, Will You Take This Rose? (The Arts Project). In May, 2017, the French-language version of her play La Rivière en Toi was produced in Quebec for the second time, and her play Ties of Blood: The Brontës was produced in Vancouver by Theatre Hera West.

She has been nominated twice for the Brickenden Award for Best Youth Play/Musical in London, Ontario, and has received grants from the Quebec and Ontario governments, as well as the city of London in support of her work. Caity has taught at Purdue University, York University, and the Nancy Campbell Collegiate Institute. She has received additional training from Jack Garfein—Le Groupe Studio in Paris, The American Musical and Dramatic Academy, CAP 21, and Tisch School of the Arts.

She is currently teaching Theatre Appreciation at Ivy Tech Community College, and working on a new sci-fi inspired play. Her play, Año Verde, about the Dirty War in Argentina, will receive its first staged reading at the Civic Theatre in Lafayette, Indiana in May, 2018.